Spring has been slow coming to us.  It has been colder overall than usual, though we have had some warmer days here and there.  The perennial plants haven’t started poking green out yet, and last year they were poking out the second week of March.  So it has been slow.  But we are preparing so that when it finally arrives we will be ready.

Despite the slow-to-come spring, the bears are awake and hungry.  They have been causing us sleepless nights because they keep trying to get into the dumpster and that causes Anya to bark (good dog!) which wakes us up and Mtn Man goes out and chases them off.  Thankfully they are just trying at the dumpster, not at the barn, or cars, or house, like they are doing in other places in our area.  We are so grateful to have Anya in the barn to keep them away from it and to alert us when they are on the property causing mischief.  And thankfully the replacement bear-proof dumpster we got a few weeks ago after a bear broke the last bear-proof dumpster is holding up against all their attempts.

Most of the ground in the main veggie garden is thawed, so we spent Saturday working on preparing it for the upcoming garden season.  We did not do a good job of cleaning it up last fall.  Sometimes we do a really great job, other times…notsomuch.  This was a notsomuch year.  So there were a lot of leftover stalks and stems from last year, some weeds and moss that had grown during the fall, plus hard-packed, settled, and cracking soil, and the bean trellis needed to come down. 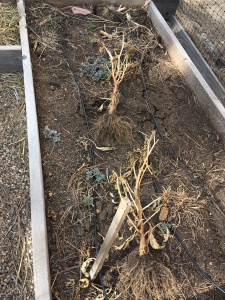 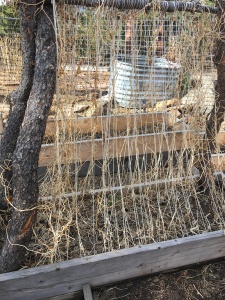 So we got all of that cleaned out.  Then we built up the newest deeper section.  Each year we are building one section of the raised beds up 7 inches higher because we found deeper boxes grow much better.  Here it is before and after the build up.

Once we built it up we filled it with compost from the barnyard.  We then added compost to the rest of the garden as well and got everything raked and loosened up and then smoothed out and ready for planting.

The metal stuff you are seeing in the boxes is our way of keeping the barn cats from using the fresh new garden soil as a litter box.  Once we plant and it is getting watered and such they leave it alone.  But when it is just sitting there and no one is out there working in the garden they tend to sneak in there.

All that is left now is to do some maintenance on the water drip system and get it ready for the season, but we can’t do that until May because there are still going to be a lot of below-freezing nights.

We also got the chicken wire around the base of the fence to the Apple Garden.  A bunny chewed a hole in the plastic mesh fence earlier this winter because we hadn’t gotten around to adding the wire yet.  It is in place now and will protect the medicinal herbs from the rabbits.

Pansy has settled in a lot more this week.  She is eating really well now and her milk production is going back up because of it.  She can often be seen laying with the flock of sheep chewing her cud, or running around with the dog (she is very dog-like in her personality and has bonded with Anya).  She still roams around looking for her goat friends some each day.  I am hopeful over time she will completely settle and wont do that anymore.

As you saw in previous posts this week we have been shearing the sheep and skirting the fleece.  The skirted fleece are headed for the wash and I am really excited to see what kind of yarn Mtn Man makes with them.

We still need to shear Rose, and that will happen this week.

I finished the afghan I have been working on for almost a year now with sock yarn scraps!  I am very happy with how it turned out and have been enjoying cuddling under it on the chilly days this last week. 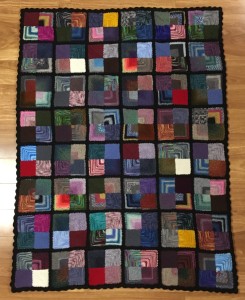 It was a fun use of scraps.  I still have a lot of scraps left and I am considering starting a different scrap afghan to use them up.

I spent the last two weeks crocheting to finish that and it left me very much burnt out on crochet and desperate to get knitting again.  I have two projects that have been sitting on the needles for over a year now, being worked on here and there put set aside when other projects came up.  I decided I really want to finish those two.  So that is what I am working on.  One is the swallowtail lace shawl:

The yarn is Greenwood Fiberworks Cashmere Delight and it is oh-so-soft and lovely to work with and have moving through my hands.

The second is the Let Go cardigan.  This is my second time using this pattern and I am doing it with a very different yarn than last time.  I am using KnitPicks Gloss DK yarn and it is also very soft and fun to work with.

I am really enjoying being back into knitting again.