This last weekend we pretty much finished up the upper coop and pen. All that is left is a little bit of exterior wall siding (board and batten), paint, which probably wont happen until next spring, and getting a gutter and downspout on it. We have been using it since March or so, but the details of finishing it off have still been worked on a little at a time.

As we were working on it this weekend, we started calculating and realized that we had built about an $1,800 coop (if all the materials were purchased from the store) for a total of about $120.

This coop is 7 ft. x 8 ft. (56 square feet of floor space), and the inside ceiling height slopes from about 6 feet to 7 1/2 feet. The pen is 8 ft. x 16 ft. (128 square feet). It is covered with a roof, and completely secured with buried wire to deter predators. We currently house 24 chickens in this coop and pen. Those chickens also free-range in the barnyard, which is about 1000 square feet. We aim to have about 2 square-feet per bird for the interior of our coops, and 4 square-feet per bird for the enclosed pens. Which gives 6 square-feet per bird for their total enclosed living space. Some days, during the winter, they are not let out to free-range, and we want to build their enclosed living space so that there is enough space even if they can’t go out to range. So, based on those rules of space that we have given ourselves, I could technically house up to about 28-30 birds in this coop.

I think the key ingredients were creativity, ingenuity, patience, and time. We thought outside the box, were willing for it to be imperfect, and we took a lot of time to be able to collect all the materials for free. Plus, the blessing of those free things showing up when we needed them (even if we had to wait a bit).

First, this coop is attached off the side of the barn, so the barn wall made one whole side of it. We had to fell a tree to make space, and the stump ended up being part of the under support structure of the coop. By the way, that tree went off to the mill and came back as a bunch of lumber that we used in many ways, mostly building the hay lofts and the garden boxes, and also on the 4x4s for the pen on this coop. It cost a total of $100 to have that tree cut into all that lumber. The parts we used for this chicken pen were about $10-15 of that expense. The branches were cut up for firewood. Only the smaller branches were sent off as slash. Nothing goes to waste around here!

The framing of the coop was built with free pallets that we collected from the local hardware store and lumber yard. There is always a pile of these sitting out back of those stores, free for the taking. Here you see the floor down and the walls beginning to go up. You can also see the top of the stump cut off next to the walls, and the cut-to-the-right-height bottom of the stump under the front corner of the coop. 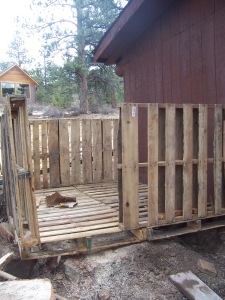 The rafters were scraps too. In fact, a few of them were actually from an old water bed frame that was being thrown out by someone we knew. My husband knows useable wood when he sees it – no matter what form it is in at the time. 🙂

Then we used all sorts of scrap sheet goods to cover the walls and ceiling. Some of these came from my Aunt-in-Laws garage, but also, my husband is in construction, and being that we have a nothing-goes-to-waste mindset, he is always collecting any number of construction scraps headed to the dump. But not being in construction doesn’t exclude people from being able to do this, we have a friend who is not in construction and he is often gathering leftover supplies from friend’s home projects and by asking permission at job sites he sees around town. 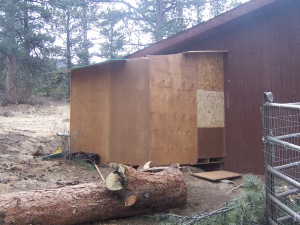 It’s not pretty, and looks pretty shabby, but it is secure and it will eventually look nice.

At this point the young pullets moved in and were living inside. The inner walls were done (which I talk about later) and the door from the barn into the coop as well (again, talk about it later).

Then we built the pen, all the supports being from that tree lumber. We had the door hinges and latch hanging around here somewhere, and the roof was covered with scrap sheet goods. The chicken wire was given to us for free by someone cleaning out their shed. I don’t have pictures of the pen building process, just the mostly finished pen from an angle down in the barnyard.

We also added a window (an old-single paned window removed from a housing remodel where they put in new windows). We got a whole set of these windows, 8 in all, that I have used in both coops and for crafty-type decorations. I love the old-fashioned look.

Here’s a picture that kind of shows the window (propped open for fresh air – the screen was scraps left around and we stapled it on the inside), and the chicken door and ramp. We bought that latch for the chicken door, which cost about $9.

Now, on to the details about the inside.

We cut a doorway between the barn and the coop. Nothing fancy, and we were careful so we could use the cut-out piece as the door itself.

*Sidenote: That silver around the door is layered foil insulation. We ended up with a bunch of it left-over from a construction project and we have lined the whole barn with it. We are, slowly but surely, covering all of the walls with board and batten, so someday there will no longer be any shiny foil showing on the walls. I look forward to that day. 🙂 Until then, at least the animals are warmer than they would be without it.

We covered over the inside of the pallet walls in the coop with some tar paper we had lying around. Then we put board and batten over it. That came from the scrap pile we bring home from the cabinet-makers every month or so. We agree to take the whole pile off their hands whenever they want us to. We then bring it home and sort it out. Much of it gets cut into firewood. But there is often one-by that can be used around the farm, especially for board and batten. And there are occasional treasures in the pile too, such as nice pieces of hardwood.

The floor pallets were covered with scrap sheet goods. The ceiling rafters were covered in layered foil insulation – also leftover from a construction project.

We built a trough feeder from scrap wood. You can see that, and the inside of the window in this picture. 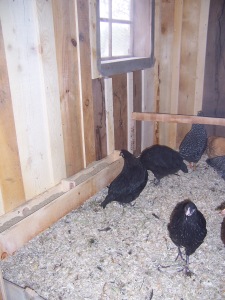 And we put in our trap nesting boxes, the building of which was described here. 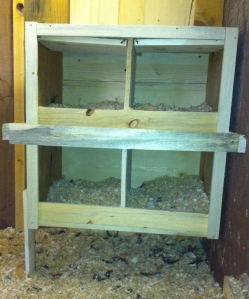 Next, it was time to get some sort of roofing material on before the moisture ruined all the sheet goods up there. We used a mule-hide two-ply system for flat roofs. We had enough base sheet leftover from a job to do the whole thing. There was a partial roll of top-cap left, but that wasn’t enough. So we spent $80 for a roll of top-cap. There is some left-over from that roll, that will sit around waiting to be used on something else.

We put up a scrap of gutter to help protect the exterior sheet goods until we could finish up.

And that is how it sat for several months. Then, this last weekend, we had enough wood to do board and batten exterior and to trim the pen supports, sandwiching the wire between the two and making it even more secure. 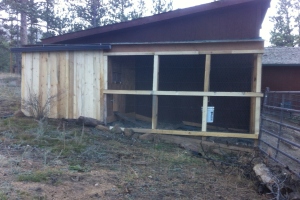 All that is left is to board and batten the exterior wall that has the window and chicken door (you can see in the first picture that it is still just miscellaneous sheet goods), paint it (will happen in the spring probably), and to put on a full length gutter that runs along the pen and the coop, and a downspout. We already have the wood for the board and batten, we have leftover paint from painting the barn, and my husband will wait for that gutter and downspout to be available for free.

So that is how we managed to build an $1800 coop for only about $100. When all is said and done it will probably be a little more than a year start to finish as we waited for the right materials to be available. But the chickens were using it safely for all but the first couple weeks of building it, so it doesn’t really matter that it took so long. I am so happy with how it turned out! And so amazed to see the final price.

I enjoy being a wife and homemaker, homeschooling mom, farm girl, writer, and helping my husband run our custom fiber processing mill.
For 14 years we homesteaded in the high-altitude Rockies, and then in the spring of 2021 we moved and have begun expanding our flocks and building a new farm on the High Plains of Colorado.  We breed and raise milk sheep, specialty wool sheep, Nubian goats, chickens, and Bourbon Red turkeys.