As the weather is getting colder, we are winding down with all of our outdoor fall projects on the homestead.  This week we finished patching the shingles on the mill roof and split and stacked more wood.  All that is left for outdoor projects is to continue with the last splitting and stacking of firewood. 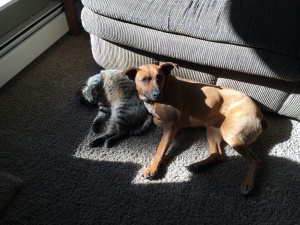 Hazel and Jerry are loving the sun-puddles in the house as the weather outside gets colder.

So we have now moved indoors for winter-weather projects.  I have been doing a lot of sorting, cleaning, and organizing of closets, drawers, and cabinets.  I have gone through all of Mr. Smiles’ toys, books, and clothing and gotten rid of anything we don’t need/use/doesn’t fit.  I also went through all my own clothing and got rid of extras and unused items.  The girls and I went through the two linen closets, the main bathroom cabinets and drawers, and the whole top level of cabinets in the kitchen.  We are really making some major clean-out progress!  We have more plans to continue with that this week.  We also canned raspberry/blackberry jam this week.

The other indoor project we started this week is the remodel of our master bathroom shower.  The first time I ever took a shower in there, tiles started falling off the wall.  That was 7.5 years ago.  We have been limping it along all this time with plastic and duct tape and it went pretty well.  That is one of the troubles with buying a fixer-upper house…you have to deal with the very imminent things first and work your way through the list.  But when it is a super-duper fixer upper, many things are very imminent and yet have to be left for awhile until you can finally get to them.  Well it is finally time and we tore out the shower this week.  Not a moment too soon, in fact, because our defenses had started to fail and there was moisture in one section of the wood.  But it is torn out and gone now and we can start fresh and dry.

Keeping intact male livestock has it’s benefits, for breeding obviously.  It also has its risks.  Male animals tend to be very single minded and usually at least somewhat aggressive.  It is how they were created to fulfill their purpose in life.  But it brings with it special management considerations to keep the animal and yourself safe.

For a long time we didn’t keep any male livestock except the occasional rooster.  And even with the roosters we had specific rules for the kids to follow and if a rooster was ever overly aggressive we got rid of it immediately.

We hauled our cows, ewes, and does down to be bred at other farms where the males we wanted lived.  But then our sheep breeder moved out of state, and we had a beautiful ram born, and thus started the chapter in our farm life where we are keeping our own rams.  This is our 3rd breeding season with our own ram, and our first ever breeding season with two rams.

Even when it is not breeding season we have set rules and ways of doing things to keep everyone safe around the rams.  The kids (except Young Man, who is 16) are never allowed to be in a pen that includes a ram unless they have an adult with them.  And when in a pen with a ram, whether you are an adult or a kid we have a strict rule of NEVER take your eyes off the ram(s).  NEVER trust them.  And during breeding season the kids are not allowed to go into a pen with a ram even if there is an adult with them.  We want this adventure to continue to be fun and safe, and it just makes sense to set up rules and procedures to keep everyone safe.  LOL, “procedures” sounds so corporate, but it is the only word I could think of.

Also, we don’t keep aggressive rams.  There is definitely a difference between a ram that you need to keep your eyes on because he will take a shot at you if he has an opportunity because your back is turned, but that will back off if you ask him to, versus a ram that will actively go after you no matter what you are doing nor what body language you are giving him.  Our rams both back off if we give them back-off body language.  If that were not the case we would not keep them.  And if it ever changes, we will get rid of them.  There is no way we can win against 300 lbs of muscle with a thick skull front – if he wants to actually hurt us, he will.  We have no interest in keeping (or breeding and passing on genetics of) an animal that we will constantly be dodging and fearful of, and that we can only safely handle through chutes.  That is not safe for a small homestead with kids.

So, I made a mistake this week.  Totally my fault and I feel sheepish (pun intended ha-ha) about it.  I was feeding the sheep one morning and Fergus was revved up on hormones and morning excitement.  I was doing everything “right” and safe and it was all going smoothly.  I had already fed Fergus and his ewes, but had to walk through their pen carrying hay to feed the back pen sheep.  Fergus came towards me with some attitude wanting the hay and I chased him off.  He was headed towards his food and his ladies several yards away so I thought he was done with me and then I broke the rule that I am always ingraining in my kids’ heads (NEVER take your eyes off the ram).  I turned slightly to the side, taking my eyes off him for a split second and putting my armload of hay between us because I thought he was going to keep heading away from me.  Then I saw him out of the corner of my eye coming after me and it was one of those “oh-no-I-can’t-move-in-time” moments where life kind of goes into slow motion and you know you are about to get hurt.  He rammed me on the side of my thigh/hip, throwing me about 5 feet and I landed with my opposite hand/wrist hitting the ground first in at attempt to break my fall.  I immediately jumped up, out of instinct and fear he might ram me again on the ground, which would be a lot worse.  And I went after him aggressively yelling.  He took off in fear of me (which is what I wanted because I wanted to show him that he was not boss over me even though he had the upper hand for a second there).

I feel totally stupid for taking my eyes off him, especially when I tell the kids that rule so often.  You can bet I won’t do it again.  And I came away with a sore, but not seriously hurt wrist, and a big purple/black/blue bruise from his head.  Lesson learned…the hard way.  Practice what you preach.  🙂

Eve’s last hatch of 6 chicks are now 10-weeks-old and we are beginning to be able to tell the males from the females.  There are 3 for-sure females, 2 for-sure males, and one that we aren’t sure about.  I am really happy with the female colors, especially the blue because I want to breed more blue into the flock.  We are planning to butcher the males at 16 weeks.

I took my weaving off the loom this week.  It is one super-long piece of fabric that I will be cutting into 5 dish towels and hemming today.  I am really excited to see how they turn out.

Little Miss and Sunshine were hired by one of our mill clients to knit 10 adult hats and one baby blanket before Christmas.  So they have both been busy busy knitting away.  Little Miss finished the baby blanket this week.