There is never a dull moment around our little farm.  Sometimes in good ways, sometimes in bad ways.  We had an adventure with some Golden Eagles this week that ended badly.

Thursday our Anatolian Shepherd LGD, Anya, was barking like crazy.  Her, this-is-serious-bark.  I ran out to see what was going on.  She was focused to the north of us and all the hair on her back was up.  I looked and watched and didn’t see anything.  Then I saw a very large bird fly through the forest.  I couldn’t see what it was because of the trees, but I could tell it was BIG.  Much bigger than the Red-tailed hawks we normally see around here.  I praised Anya and felt good that she was dealing so well with an aerial predator.

We have had problems with aerial predators before, specifically a Great-horned owl that over time killed 4 of our chickens.  This was back when we had our previous LGD, Tundra.  He was an excellent LGD, but he was getting old and slept a lot.  The owl would wait until he was asleep, then come down on a chicken, then Tundra would wake up and go after the owl.  The owl never got away with a bird, but they died anyway from the wounds from being hit by the owl.  We haven’t had any issues with aerial predators since Anya has been on guard.  She is very aware of them and young and always on the look-out.

Friday the kids brought me outside because they were seeing a large bird fighting with a Red-tailed hawk and they were hearing a lot of loud bird calls that were not familiar to them.  Throughout the day all of us got glimpses of the large bird but couldn’t figure out what it was.  And we heard the loud screeching all day.  Anya was on edge and barking a lot.  We kept a close eye on the barnyard and all seemed to be going well with Anya on duty.  When it would come near she would bark and all the chickens would run into the safety of their pen.

Mid-afternoon heat the activity in the sky calmed down and everything got quiet.  In the heat of the day the sheep, goat, and Anya all head into the barn to lay in the cool shade with the cross breeze blowing through.

What happened then wasn’t figured out until later in the day when we investigated everything, identified the large bird, and put all the pieces of the puzzle together in our heads.  From what we can tell, Anya was in the barn with the livestock and the chickens were in the barnyard scratching around.  A female Golden Eagle, with two fledglings to feed, waited for her opportunity patiently, and when Anya was in the barn she struck one of our Easter Eggers and started eating on it.  Anya figured out what was going on and came running out of the barn at the eagle, chasing it off.  Too late for the chicken, unfortunately.

The mom and the fledglings continue to hang out around our property, so we have kept the chickens closed in their pen until they move on to a new location.  And we are keeping our eyes on everything in the barnyard because although we don’t think she would go for a lamb, especially with the fact that Anya went after her, we are still being cautious.

I find it interesting that it was an Easter Egger, because last December when we lost a chicken to a bobcat, because Anya was in a different pen, it was an Easter Egger too.  We only have a couple in the flock of over 20 birds, so it seems too coincidental that they were both EEs that got killed.  I am guessing they don’t have as much predator instincts as the rest of the flock.  Especially because on Friday when the eagles were around we kept seeing the flock run into their pen throughout the day whenever they thought there was danger.  So I am guessing the EE didn’t run in when the rest of them did.

Our property doesn’t have pasture, so we have to feed hay year-round.  Because hay is so seasonal in Colorado, and prices and availability change drastically based on the season, we try to fill the loft of the barn with all the hay we need for an entire year during the summer months.  We put up our first load this week.  We will probably be getting two more loads before the end of August.

Medicinal herbs can be hard to get going from seed.  This is our second year for the medicinal herb garden and things are starting to go pretty well.  We have two types of chamomile, one that we transplanted from the wild into the garden, and one that we planted.  Both are doing very well.  The yarrow is also starting to take off.  The lemon balm looks pretty good, and the echinacea are working on putting out some leaves. 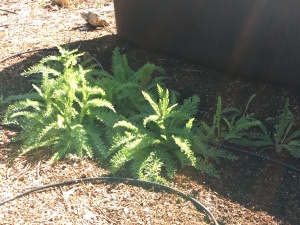 Hopefully in a couple of years this is a beautifully full garden.

The celery harvest has started. 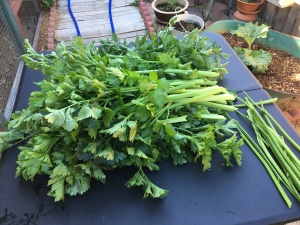 We also harvested our first 4 cabbages, for a total of 16 lbs.  We made cole slaw and started a big load of sauerkraut fermenting in the big crock.

I love fresh coleslaw in the summer!  And we will have plenty of sauerkraut for the fall and winter.

We made our first ever feta from our raw goat’s milk.  It turned out very yummy, except we over-salted it.  We are anxiously saving up milk to make another batch this week, without too much salt.

For the feta we needed a double boiler set up that could hold a gallon of milk.  Our double boiler isn’t even close to that big.  But Little Miss thought of this idea to use a big stainless steel bowl with butter knives on each side to suspend it a bit over the pot of boiling water.

I finished my Nightshift Shawl!  The pattern is by Andrea Mowry, and the yarn is Yakity Yak by Greenwood Fiberworks.  I am very happy with it.