Mr. Smiles is 20-months-old now.  Oh-how-time-flies!  He is learning to feed himself and man-oh-man mealtimes can be very messy as he perfects his skills and gains his independence.

14 years ago when Young Man was a baby, a friend gave me homemade bibs for him.  They are great because they tie at the neck (my kids have always yanked off velcro bibs), they are a good amount of coverage, including the short sleeves, they are fabric so they absorb moisture instead of running it down to his lap, and they are washable.

Surprisingly, those same bibs have lasted through four children before Mr. Smiles, and 14 years of life.  And they are still going!  Yes, there is some wear and tear on them, but they are still totally functional. 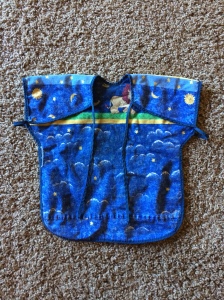 Despite that, I decided to make him a few more so I wouldn’t have to rush them through the wash so much.  I apologize ahead of time for the poor pictures.  I am up to my eyeballs busy right now, so I just quickly snapped pics with my cell phone while we were sewing them.  Little Miss is learning how to sew on the sewing machine, so she helped me make them, doing the easier parts while I did the harder parts.

We used the old bibs as a pattern.  We had to detach the bias tape that works as the underside of the sleeve so we could lay it out flat.

Since I don’t have a pattern for them, I laid out the cut fabric with some measuring tapes so that if you would like to make them yourself you can estimate and figure out how to cut them out.

Once we had the two fabric pieces cut out, it was time to put the biased tape on.  You could just do them single thickness of fabric, but I like the double thickness for sturdiness and absorption.  We put the two piece wrong-sides-together before we attached the bias tape.

First, we sewed on the two top edges, and cut off the extra. 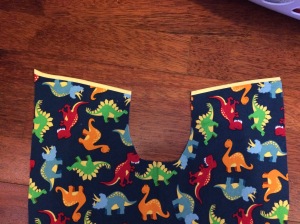 Next, we sewed on the neck section, with 8 inches of tape hanging off each side of the neck for the ties.  We finished those ties by sewing the bias tape closed along them, and tucking in the end and sewing it as well. 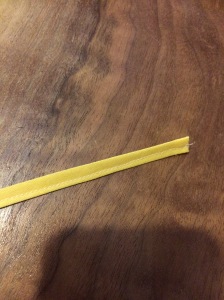 Then we sewed the bias tape that went all the way around the sides and bottom.  We left 3 inches of tape, sewed closed, but with an unfinished end, at the top shoulder, and then sewed down to almost where the sleeve curves in.  Then we stopped and tucked the end of the tape into the edge and sewed it into the rest of the tape as we went.  This creates the “sleeve.” 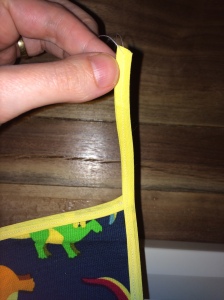 We continued around the whole bib, stopping right before we got to the same spot on the opposite side (where the sleeve needs to be sewn in again).  We backstitched there and took the bib off the machine.

Then we laid the bias tape along the bib where it would need to go, cutting a tail off 3 inches from the top of the shoulder.

Then, starting at the 3-inch tail, we attached the bias tape for the sleeve the same as the other side, sewing the raw tail end into the other bias tape right where the curve starts.

***If you didn’t want the hassle of sewing the ends into the bias tape, you could just sew the bias tape all the way around, leaving a 3-inch tail on each side up at the top corners.  Then you could take the tails and tack them in place at the curve with a few stitches.*** 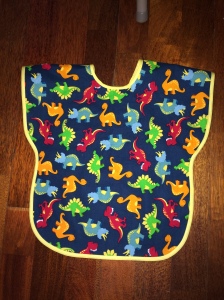 We made three different ones.  I am hoping to buy some more fabric and bias tape soon to make enough so we have about 7-9 bibs total, that way he could have one each day and I could wash without running out.