We have a very short growing season here, averaging 10-12 weeks from the last frost to the first frost.  That does not give much time to grow anything, let alone tomatoes and other long-season heat-loving plants.  In addition, we often get down into the 40sF at night throughout the early summer and early fall.  So we have to find ways to help extend the season to accommodate the plants that need more time, and more heat to grow successfully.

The first thing is definitely to pick the right variety.  A tomato that does well in Texas is NOT going to be happy up here at 7,500 feet in the cool mountains.  And it wont make fruit in time for harvest.  My most successful varieties came from Siberia, and I also have found some great varieties through the high-altitude seeds offered by Seeds Trust.

The next best thing we have found, after picking a good variety, is to use Wall-o-Waters (WOWs) to protect the plants for the first weeks in the garden.

We harden off all of our seedlings for a week before they go into the garden.  To harden them off we put them outdoors, in blotchy sun/shade – like where the shade of the porch banister is with gaps of sun, or in the shade of a tree where splotches of sun come through.  The first day we put them out for about 30 min to an hour.  The second day we do 2 hours, the third 4, and so on.  We watch how they are tolerating it, if they seem to be overly stressed we bring them in sooner.  If it is windy or rainy we bring them in.

At least 24 hours before planting, fill your WOWs and get them set up in the garden where you plan to put the plants.  The easiest way to fill the WOWs is to put them around a 5-gallon bucket and then fill each tube 3/4 of the way full with water.  Then you can just lift the WOW off the bucket, or lift the bucket out of the middle of the WOW.  Meanwhile, the bucket supports the WOW while you are filling it so it doesn’t fall over.  It is also easier if you have two people, one to open each tube (which generally takes two hands) and one to put the hose in it.

Once they are filled, put them in the garden in the spot where you will be planting and let them sit for 24 hours.  This will give the water in them time to adjust to the outside temperature.

We have found that our seedlings do best when we plant them when their spot in the garden is in the shade.  It gives them a little time to acclimate before they are in full sun.  For us, that means planting in the late afternoon because our house shades the garden then.

Plant one seedling in the center of each WOW.  Once the seedling is in place, squeeze the top of the WOW to get some of the water out, causing it to be in a cone shape instead of a cylinder shape.  This closes off the top more to help protect the entire plant. 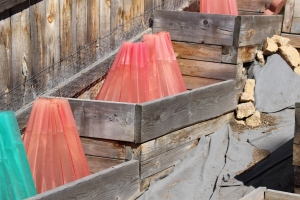 We leave the WOWs on the tomatoes at least until the danger of frost has passed, longer if the plant is still fitting inside (which it usually isn’t).  Then we remove the WOW and put a cage on the tomato plant.

To store the WOWs, we pour all the water out and rinse them off with a hose, then we set them upside-down to dry outside.  Once they are dry they easily roll up or fold up and are stored indoors.  We have WOWs that have lasted 7-10 years when well cared for.

Eventually they get a hole in one tube – but we still use them.  Then they get another hole, and so forth.  When there are more than 2 damaged tubes it gets really hard to keep them standing well.  We have found that we can cut the good tubes off of a damaged WOW and insert them into the tubes on another WOW that have holes.  That will extend the life of them.

Wall-o-Waters are a great way to extend our very short growing season.  It gets the plants out into the garden a full month earlier, and keeps them warmer and happy while they grow.