Happy New Year!  It is always exciting to start a new year and wonder at the adventures it will hold.

Thank you all for your name suggestions for our new ewe…they were all wonderful!  We also gathered suggestions from friends and family, and ultimately left the decision up to Little Miss this time.  She took her time and considered all the options, and then went out and “had a talk” with the ewe.  Interestingly, after her talk with the ewe she informed me that she now knew what the ewe’s name was, but that the ewe didn’t have much to say and was much less talkative than our other ewes.  🙂  Little Miss informed us that her name is Rianna, which is Welsh in origin and means “great queen” or the “goddess of fertility.”  Which seemed very fitting for the ewe that will hopefully be the mother of our flock sire ram.

Rianna, Agnes, and Toffee were all shorn this week.  They look SO different without their big fluffy fleece on.  Here are some before and after pics.  Obviously, with their jackets on you can’t really see their full fleece, but you can see how big and poofy they are.

With Toffee I couldn’t find a good pic of her before she was shorn, this is the best I have, she is the little light brown ewe eating in the front of the pic. 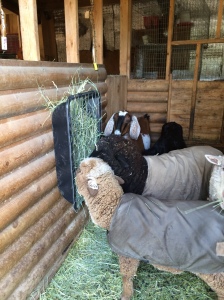 And here she is being shorn, and then when she was finished.  The moorit color is much darker in her base fleece, and lighter the farther out it gets, so she looks very dark now! 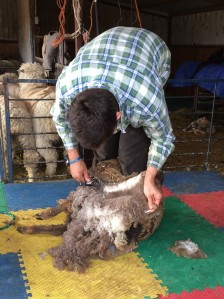 And here are Agnes (moorit) and Rianna (white) before they were shorn: 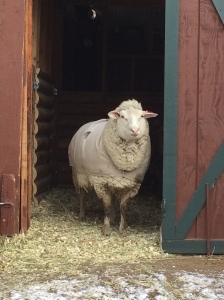 Here they are after: 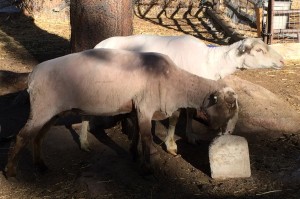 You can see how much lighter Agnes is than Toffee even though they are both moorit.  The moorit color is diluting most of the time, which means the older the sheep gets the lighter the color gets.  Agnes is 5 years old, Toffee isn’t even 1 yet.  See the color difference?

Occasionally a moorit sheep doesn’t have the diluting gene.  Those are very special.  We wont know about Toffee until she gets older.

Now that we have completed the part of the barn remodel needed for the goats and sheep to have their babies, it is time to move onto the next step – prepping the upper coop for the new chicks.

The upper coop is attached to the barn.  It previously had a gutter-shaped feeder, and 4 trap nest boxes built inside of it.  And roosts kind of all over the place.  We accessed the coop from inside the barn.

To make it easier and more efficient to care for the birds in that coop, we decided to move the nest boxes so we could access them from outside the coop, add a gravity feeder that holds a full bag of feed, and rearrange the roosts.  Those features are in place already on our lower coop and we really like how much easier they make daily chicken chores.

First, Mtn Man moved the nest boxes, and finished the barn wall too (the wall previously just had the “tin foil” looking insulation on the wall). 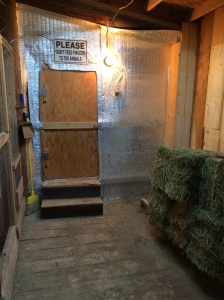 Before: view of the coop door from inside the barn

After: Nest boxes now accessible from outside the coop/inside the barn, and wall/door finished with board and batten.

Before: Nest boxes inside the coop 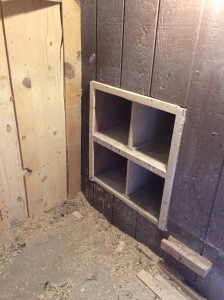 After: Nest boxes through wall so we can access from outside the coop

We still need to add doors to the outside of the nest boxes so we can just open them up and gather the eggs.

That is the progress so far.  We still need to put the door(s) on the nest boxes, build the new feeder, and put in the new roosts.  Then we also need to fix the exterior pen of that coop because of bear damage.  That will complete phase 2 of the barn remodel.

The new fence feeder we built has been working beautifully since we took out some of the uprights and widened the holes in the wire.  The one problem, however, is that while all 7 of the sheep and goats can technically fit there to eat, it is a bit more crowded than we think is good.  The lower sheep in the pecking order are definitely having to work harder to get in there and eat.

We built this one the same as the last, but with one major difference – we used a wire stock panel with 4×4 inch squares on it for the wire part.  This is what we originally wanted to do with the first feeder we built, but we couldn’t find a panel at the time and thus just used 2×4 wire fencing.  The problem being that the holes weren’t big enough and we had to cut the holes to 4×4, and the wire is not as thick and thus easier to bend so we had to add some wood uprights as support on the wire.

With this one we found the panel we wanted and thus didn’t have to do any extra cutting, and didn’t need the support wood.  It went much faster to build and we are much happier with the end result. 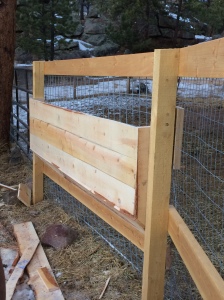 The first feeder we built is 8 feet long, this one is 9 feet long, so it more than doubled the feeding space.  Everyone should be able to eat freely now without being squeezed out.

And most of the wood used for both the feeder and the barn wall discussed above came from those trees we cut down back in October and November.  It is really fun to use stuff from our own land and not waste anything.  🙂

One thought on “Sunday Homestead Update”