I am finally getting to the last part of the garden reviews for the year – the tomato experiment.

Our climate consists of a 10-12 week average growing season (frost to frost), and during that season we probably average 70s F during the days, and can have nights that dip into the 40s several times throughout the season.  Because of this, we had always heard that it was nearly impossible to grow tomatoes here without a greenhouse.  We knew a couple of people who were successful, but they would use pots and bring them into the house at night and back out on the deck in the day.  We found some very short season tomato varieties and decided to set up an experiment to try out different ways of growing tomatoes and using the different types to see if we could find a type and a method that was successful.

We planted 5 varieties of tomatoes – Independence Day, Roma, Glacier Early, Red Pear, and Orange Pixie.  Each variety was planted in three different places – in pots in the large south-facing windows in our living room, in pots along the side of the house that were brought inside during the cold evenings and bad weather and left out during the warmth, and in the vegetable garden outside.  The ones put right into the vegetable garden were protected with wall-o-waters early in the season until all danger of frost passed.  All the tomatoes were started in the same place indoors and in the same manner.  They all had the same soil – except that the potted ones were obviously limited by their pots.  The vegetable garden had natural rain watering, plus the drip system.  The pots that were in and out got some natural rain, but mostly hand watered with a watering can.  The indoor plants got only hand watering with a watering can. 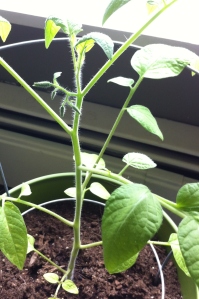 After we started the experiment, a friend of a friend gifted us some seedling tomatoes, most of which were varieties from Russia and Bulgaria and were supposed to be very cold and short season tolerant.  These varieties only got planted in one place – the vegetable garden, but we still included them in the experiment and tracked their progress and production as well.  The varieties were: Russian Yellow, Russian Red, Bulgarian Pink, Rococo, and Burdock. 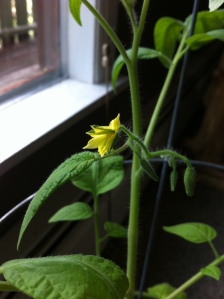 We found that the plants in pots indoors, and the pots that moved indoors and outdoors all did poorly.  The plants in the garden did very well, with certain varieties doing much better than others.  Also, the indoor plants were extremely tall and thin, whereas the ones in the garden were extremely thick stemmed, shorter, and very bushy and thick with leaves.  We found that the ones in the garden were unable to ripen before frost – however we cut them off the vine, leaving a bit of vine attached, and spread them on tables in our basement and they all ripened within 4 weeks. 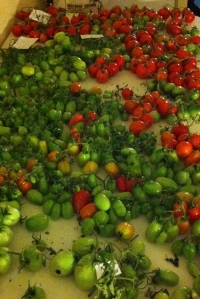 Here are the results:

We also wanted to save seeds from the heirloom varieties that did well, so we were able to save the following:

We were very happy with the performance of the Independence Day, Roma, Russian Yellow, Russian Red, and Burdock in the garden.  The Roma was not heirloom and we don’t have any more seeds from it.  So we decided that next year we will be planting the ID, RY, RR, and Burdock in the garden again, with the wall-o-waters to protect them early in the season.  We will plan to harvest before the frost, even if they are not ripe, and ripen them in the basement again if needed.  We consider this experiment a huge success, as we harvested about 75 lbs of tomatoes this year!!!  We are happy to know that it is possible to grow tomatoes here without the help of a greenhouse, with some special care and consideration, and we are very excited to continue working on growing tomatoes and improving our production as much as we can.

Now maybe we should try peppers… 🙂