We are back to blogging, after a wonderful week enjoying family and the holiday.  Our Thanksgiving feast and celebration was excellent.  Despite the fact that we were unable to raise our own turkeys this year, we still were able to enjoy a free-ranged, home-grown turkey from purchased live off of our friend’s little homestead.  It turned out excellent, was delicious and moist, and it felt so great to know that the turkey lived a healthy life and was killed humanely. 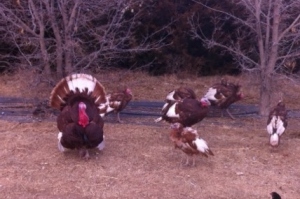 This weekend marks the beginning of Advent and the Christmas season for us.  We spent the weekend decorating and making Christmas treats – including cut-out GF sugar cookies, Old-Fashioned Hard Candy, and Great-Grandma Harriette’s caramels (click here for recipes).  The house feels cozy and Christmas-y. 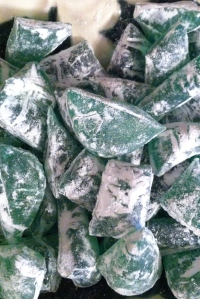 The sheep are still at the breeder for a couple more weeks.  The good news is that the breeder has told us she has seen the ram breeding a couple of our ewes so far.  We are hopeful they all come back pregnant! 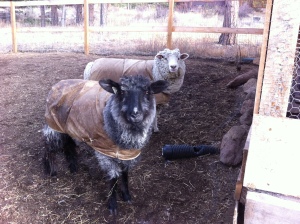 The bear that has been plaguing our farm has returned yet again.  This time he changed his tactics from tearing apart the chicken wire on the upper coop where the hens are to trying to get to the two roosters living in the lower coop for the winter. 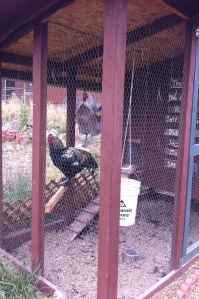 We got a new clothes dryer and husband hauled the old one out.  It was placed at the top of the landscape stairs (near the lower coop) right by the gate into the back yard waiting to be loaded to go for scrap.  The bear pushed and pushed on the gate until he broke the latch, then as he pushed through the gate he knocked it into the dryer hard enough to knock the dryer down the stairs.  This, of course, caused a huge loud crashing noise and by the time we got out there he was long gone.

We decided that since this was his 5th visit, and he has caused a lot of damage to the upper coop’s pen (we are going to have to re-wire most of it), it was time to call the wildlife officer.  We discussed the situation with him and he gave us several options of what can be done (from setting a mace trap that can deter him all the way to them trapping him and euthanizing him), as well as some ideas of things we can do to deter him even more (some of which are totally undo-able because of our set-up).  We were also told about our legal right to shoot him if he is attacking, or attempting to attack our livestock or threatening a human.  We are hopeful that it does not come to that.  We do not want this bear to die if he doesn’t have to.  We live in the mountains because we love the wildlife and we love living with the wildlife.  We want to life harmoniously with the local predators.  That is why we build all of our livestock housing as predator-proof as we can, and we utilize a livestock guard dog to help protect our animals and deter the predators.  We are making it as hard as possible for this bear to be able to get to our animals.  We are doing as many preventative things as we can; we never leave out trash or bird feeders that would draw a bear to the property.  AND we are doing things to deter him from coming here.  But if after all of that effort this bear is still completely determined to eat our livestock, then it might come down to it.

The officer agreed with me that it is very strange that this bear has been back so many times without getting any reward at all.  It makes sense when a bear eats a chicken that they come back, but this bear has not eaten ANYTHING on our property and has come back five times.  Bears are generally lazy animals and don’t want to put too much work into anything.  So the officer says this one might be an exception and just bent on causing trouble at our place.  We hope not.

For now we are hoping that the dryer “hazing” has scared him enough to not come back.  We still have the trail cam set up on the upper coop, and we are hanging ammonia soaked rags around the coops to attempt to keep him away (they apparently hate that smell).  He should be going into hibernation any day now as well.  I just hope we are not his first stop when he comes out totally hungry in the spring.

I have continued to work on the many knitted Christmas presents I am making.  I finished the fox scarf for my oldest daughter and absolutely LOVE it! 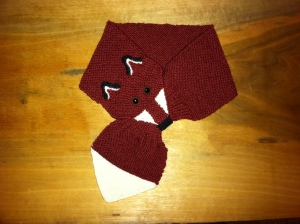 I used the pattern called “Fox Scarf” from Ravelry, but didn’t follow it.  I pretty much just looked at the pictures and then did it my own way.  I used Premier Yarns Serenity Sock weight yarn in burgundy, black, and white.

I took this project to a knit-together last week and a friend there happened to be making fox mittens that I think would match it perfectly.  So now I am contemplating casting those on and trying to get them done as well to go with the scarf.

My oldest daughter is becoming quite the little knitter (she is 9 years old) and completed a baby hat this week for a friend of ours. 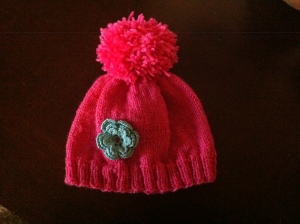 She didn’t make the flower, but she made the rest completely on her own.  It was her first time knitting in the round on dpns.  She is very happy with it and I am a very impressed mama.  🙂 It is really fun to have my daughters start getting into a hobby that I enjoy so much.  It is a blessing to be able to share the enjoyment with each other.  She wants to try socks next, so we picked out some sock yarn for her last week.

Another blessed week on the homestead!

We are happy to have you visiting us!
I am wife to an amazing man (“Mountain Man”) for  21 years now. We have been blessed with 5 children. Two girls: “Sunshine” (15) and “Little Miss” (13). And three boys: “Young Man” (17), “Braveheart” (12), and “Mr. Smiles” (5).
I enjoy being a wife and homemaker, homeschooling mom, farm girl, and helping my husband run our custom fiber processing mill.
In this blog we are sharing what we learn as we build and run our little homestead at high-altitude to provide natural, home-raised food for our family. 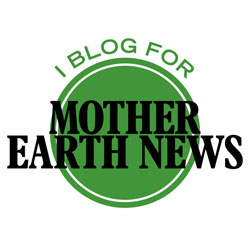