If you recall, a couple of weeks ago we were awoken by our farm dog barking.  By the time husband got out to the barnyard whatever it was that had caused the alarm was gone, but it left this hole in the exterior pen to the chicken coop.  The hole was about 12 inches by 18 inches. 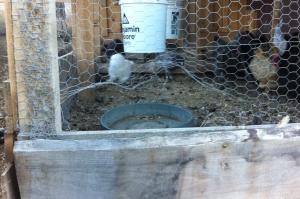 We figured it most likely was a bear, based on the damage and size of the hole.  We hoped the incoming cold weather would drive it into hibernation.  A couple of days later we came out and found this: 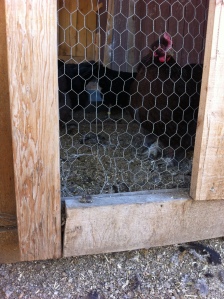 A much smaller hole, only about 3-4 inches diameter.  But the interesting thing was that the wire was pulled extremely tight in that shape, it seemed just the right size for a bear muzzle that was shoved in there hard – like it was trying to reach something just inside the wire.  We usually scrap the chickens inside this pen, so we thought maybe he was reaching for a leftover scrap of food.  We decided to not scrap them in this pen anymore and instead just scrap them in the open barnyard.  We also set up a trail cam aimed at the coop to try to catch the culprit on film.

All through the cold and snow last week we had no more damaging visits.  The trail cam didn’t function as cold as it was so we took the SM card out and turned it off.  The coyotes were all over the place, even in the broad daylight, but no nighttime visitors tearing at the coop.

The last few days have been warmer (20s-30sF).  But we figured the bears had gone into hibernation because of the cold so we didn’t set the trail cam back up.  We awoke to find these two huge holes:

Somehow we slept through the farm dog barking last night (exhaustion will do that to you).  Each is the size of the first hole we had, and the wire was pulled outward, as if the bear had tried to squeeze through the hole…couldn’t fit…and then pulled himself backwards out of it.  The tracks in the snow confirmed our fear…that it is indeed a bear.

The tracks show that it is a younger bear (smaller).  We are guessing this is his first hibernation without his mom and he hasn’t been able to eat enough calories yet to go in for hibernation.  He is desperate.  This would also explain why he has come back three times even though he hasn’t been rewarded with food even once.  Normally in our area the bears don’t put this much effort into getting into a pen unless they eat something during the first or second experience.  The reward drives them to keep coming back and trying even harder.  These two big holes showed he was trying really hard, but he has never been rewarded for his effort so he must be pretty desperate.

A desperate bear in the area does not make us feel very comfortable.  We have patched the holes and are setting up the cam again.  There is not much that can be done.  We will continue to keep the animals as secure as possible, and leave the farm dog out in the barn to be a deterrent – listening for his alarm.  But as I have said before, there isn’t much in the way of housing that will keep out a determined full-grown bear.  Thankfully this is not a full-grown bear, but it is still worrisome.